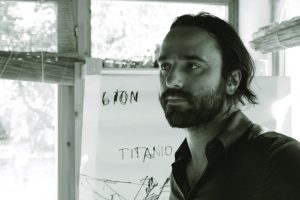 Thomas Torelli is a Rome based director and producer focused in particular on social themes. In 2006 he was executive producer and co-author on Franco Fracassi and Francesco Trento’s feature documentary ZERO: An Investigation into 9/11, winner of the audience award at the Rome International Film Festival 2007, winner of the Audience Award at the Festival Internacional de Cine Documental de la Ciudad de México in 2008 and distributed in more than 70 countries. As a producer Thomas was involved with Dario Baldi’s Pablo – The poet’s lives (AFI Film Festival Los Angeles 2005, Montreal FF 2006) Francesca Nava’s L’altro Messico – Il ritorno del Subcomandante Marcos, Mario Balsamo’s Sognavo le nuvole colorate (2008 Locarno Film Festival). In 2009 he produced and directed Sangue e Cemento, nominated at the Nastri d’Argento for Best Documentary of the Year. In 2011, he co-edited and produced, supported by the Piedmont Film Commission, The brat syndrome by Alberto Coletta, a documentary about ADD.

In 2014 he finished the feature documentary Un altro mondo – Another World,presented at the 2014 RIFF – Rome Independent Film Festival and the Phoenix Film Festival receiving excellent public and critic’s reviews. The feature was then invited to the Ischia Film Festival (Italy), Ariano Film Festival (Italy) and the Voices from the Waters International Traveling Film Festival (India). The film won the “Best Documentary Award” at the Clorofilla Film Festival, the official festival of Legambiente (Italy). It won two awards at the the 27th edition of the Bienal Internacional de Cine Científico – BICC Ronda (Spain): the Public Choice Award “Diploma ASECIC / BICC 2014” and the “ASECIC Guillermo F. Zúñiga Trophy” to the Best Scientific Film.

Francesco attended film school at the DAMS – University of Bologna and at the Scuola Nazionale di Cinema – Centro Sperimentale di Cinematografia, where he graduated in 2004 as a Cinematographer under the guidance of Giuseppe Rotunno, AIC ASC. He completed his education by working as assistant operator and as camera operator for features, tv series and documentaries for several years. He is currently working as a Director of Photography for many music videos, commercials, fictional projects and documentaries. The documentary 148 Stefano, I mostri dell’inerzia, which he photographed, won the Special Nastri d’Argento Award in 2012.

Claudia Palazzi is a sociologist and a filmmaker. In 2005 she directed two documentaries (In Benito’s Land. Predappio and Memories of Crespi d’Adda), selected in various international festivals. Since 2006, she has supervised the scriptwriting of historical and news independent documentaries. Her work in the film industry also includes collaborations with Lucky Red Production Company and Janus International. In 2008 she started working with major Italian Production Companies and TV Channels (Endemol S.R.L., Zodiak Active, Current, Cult, Italia 1, Fox Channels and Sky 1) as an assistant director on several documentary series and fictional documentaries focused on modern society and culture: Erotika Italiana, Business of Sex, Addiction, Gossip History, Italian Doomsday Preppers, etc. In 2011 she co-directed her first full-length documentary Jeans and Marto’with Clio Sozzani.

Gabriela Ramirez is a Senior Graphic Designer and Art Director from Mexico. For over 15 years now she has been designing logos, brand identities, book covers, magazines, folders, flyers, posters, brochures, invitations and everything in between. She attended the The Art Institute of California, San Diego, where she received her BA in Graphic Design. She holds a Master in Content Design from the University of Florence. Once in Italy she also frequented the Master in Enogastronomic Communication at the University of Siena and got certified as Sommelier through the Associazione Italiana Sommelier. She lives and works in Rome, Italy.

Written and Directed by / THOMAS TORELLI

We’ve been lucky to have really great partners join the effort of the film: Terra Nuova Edizioni and Essere Animali have come on board and we couldn’t be more grateful. Terra Nuova Edizioni has great history of engagement, their magazine is the oldest and most important ‘green’ magazine in Italy. This valuable partnership will will help ensure regular media exposure that will enhance our efforts and help us to get the message out. Essere Animali and their team have graciously given us access to their archive. This priceless resource gives us access to footage we need to complete telling this story.

Essere Animali is a non-profit organization that, through the engagement of people, promotes a cultural, social and political change aimed at overcoming all forms of exploitation in respect of all the animals that share the planet with us.